A Friar In New York

Fr. Steven Patti was born in Boston and grew up in nearby Burlington, MA. He joined the friars in 1994 after having served for a year as a volunteer at St. Francis Inn, a soup kitchen in Philadelphia staffed by Franciscan Friars. He was ordained in 2001 and has served in Wilmington, DE; Durham NC (at Immaculate Conception); Providence RI; and at the St. Francis Inn in Philadelphia.

Steve is a fan of all the Boston sports teams. He is an avid reader of fiction, history, poetry, and spirituality/theology, and also likes to go to the movies, and to visit art museums. When he gets the chance, he loves to hike in the White Mountains of New Hampshire with family and friends, and to spend time at his family’s lake house near the New Hampshire/Maine border. 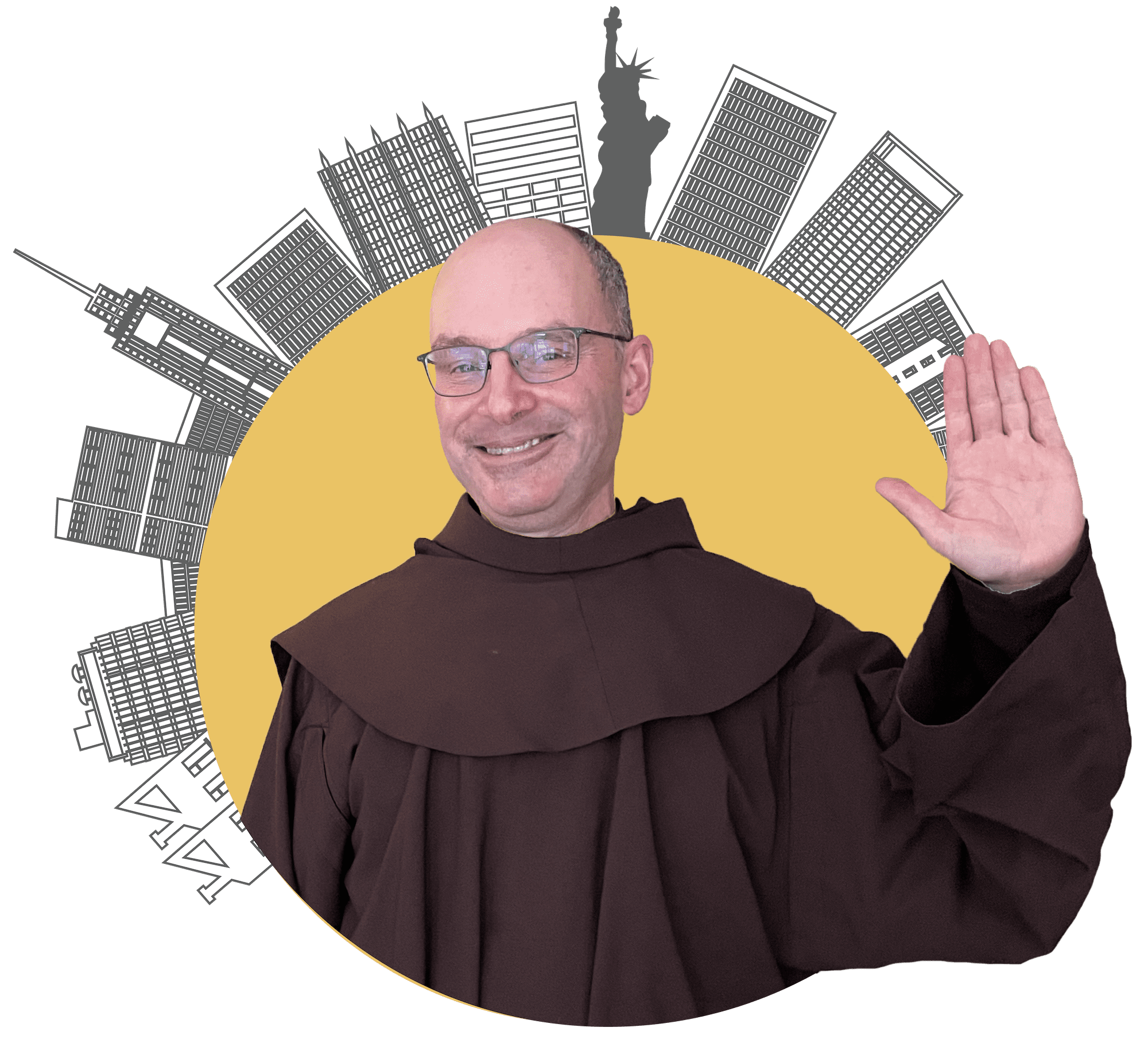 Another Postcards From The MoMA

Another postcard from my recent trek to the Museum of Modern Art on 53rd Street here in Manhattan, and it’s another postcard of a Dorothea Lange photograph. This one is called “Oakland, California” and it’s from 1942. It’s a black and white close-up image of the side of a house: an angled vertical on the left side of the photograph, horizontal siding, and a sign over the siding that reads “Furnished Rooms & Light Housekeeping Rooms.” We have here a close-up image of a boarding house, of a sign advertising available rooms. And just below the posted sign, a made-up sign tacked to the siding which reads “No Rooms, No Rooms.” It’s stark in its opposition to the sign above it and to what it means to tell us: times are hard, space is tight, there is no room at the inn. It’s stark and harsh in what it advertises: in this place, in this time, there is not enough for everyone. I am drawn to the photographs of Dorothea Lange, the way she brings her camera into the tough places of America and reveals the hard truths that life, that the American dream, may not be so easy for many in this land. Her photographs tell stories, bring us places and let us know that for many life may not be so well. And yet by framing her photographs the way she does, by showing us characters and images and highways and road signs, she gives a dignity to these same characters and places, lets us see, lets us learn about a side of America that may otherwise go unseen. 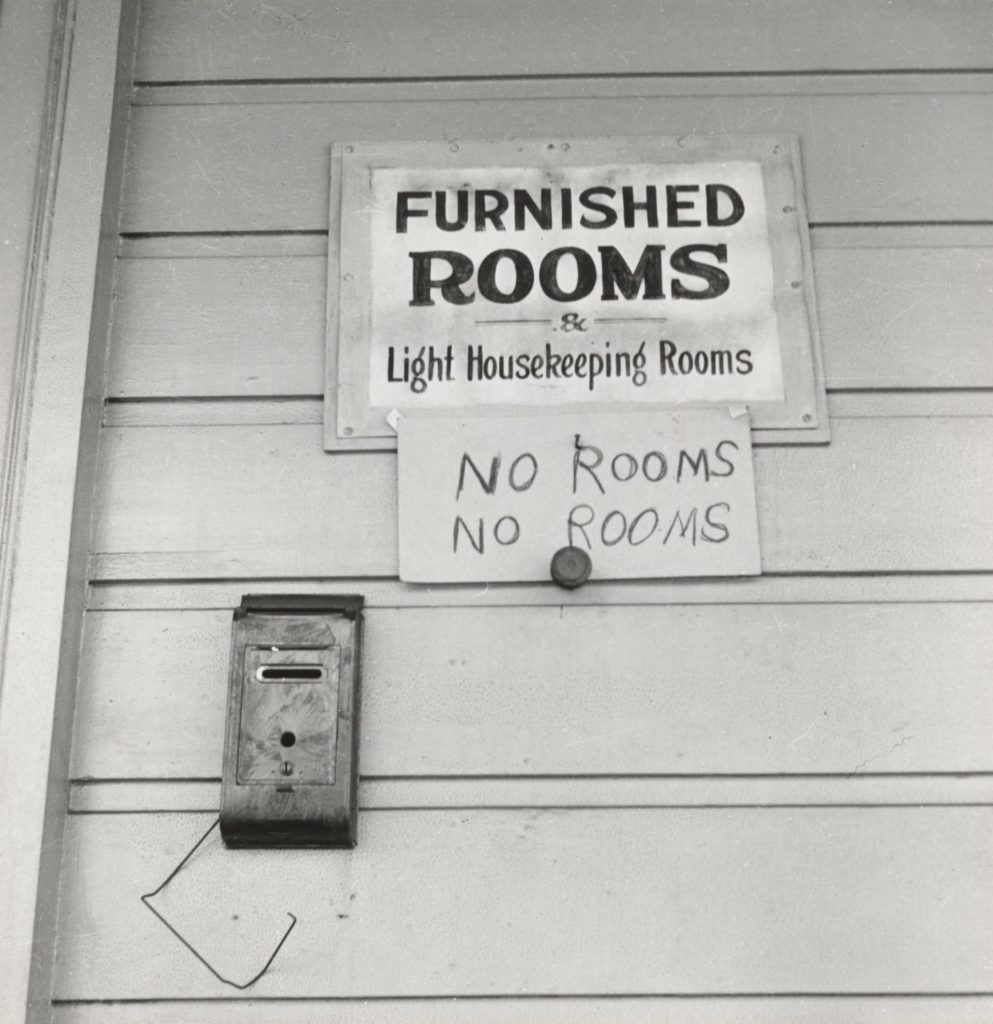 I am taken also by this made-up sign with its words “No Rooms, No Rooms” added almost with a sense of desperation: we have no room. And how it reads almost like a modern day Nativity story, the Holy Family on the move from Nazareth looking for a place to stay and they find “no room for them in the inn.” (Luke 2:7). As if to say, it still happens now, this searching for a place to put down roots, to find some sense of home. And isn’t this why we go to look at art, why we walk around a city like this with our eyes open? To draw closer to the human experience, to the presence of the Holy in our midst.

A virtual movie recommendation….the Carolina Theatre in Durham NC is offering a virtual screening of “Francesco” which is a documentary about Pope Francis. I watched it last night on my iPad. It offers a beautiful portrayal of our beloved and bold pope. You can find the link on the the theatre’s website http://www.carolinatheatre.org and I believe it’s good through Thursday. Highly recommended!

One day last week at the gift shop at the Museum of Modern Art, and how I love to look around museum gift shops just to see creativity and imagination at play – books and cards and prints and objects all there, and you can take them home with you! There is a table marked “Sale” and on the table are oversized postcards from a recent exhibition of the photography of Dorothea Lange. She is perhaps best known for her photograph of what has come to be known as “Migrant Mother,” taken during the years of the Great Depression.

There is that postcard for sale, only 50 cents, and there are others too, and among them is another by her which has the title “On the Road to Los Angeles, California” from March 1937. I buy 10 of these, and one of them I keep in a frame on my desk. It’s a black and white photograph of two men walking along the dirt shoulder of a highway, their backs turned to us, one carrying a suitcase, the other with a bag slung over his shoulder. The road stretches on in front of them.

On the right side of the photograph, outlined against a gray and cloudy sky, is a billboard by the side of the road, and on the billboard is an image of a man reclining comfortably in a chair. Above the man in the chair are the words “Next Time Try The Train,” and next to the recliner the word “Relax.” 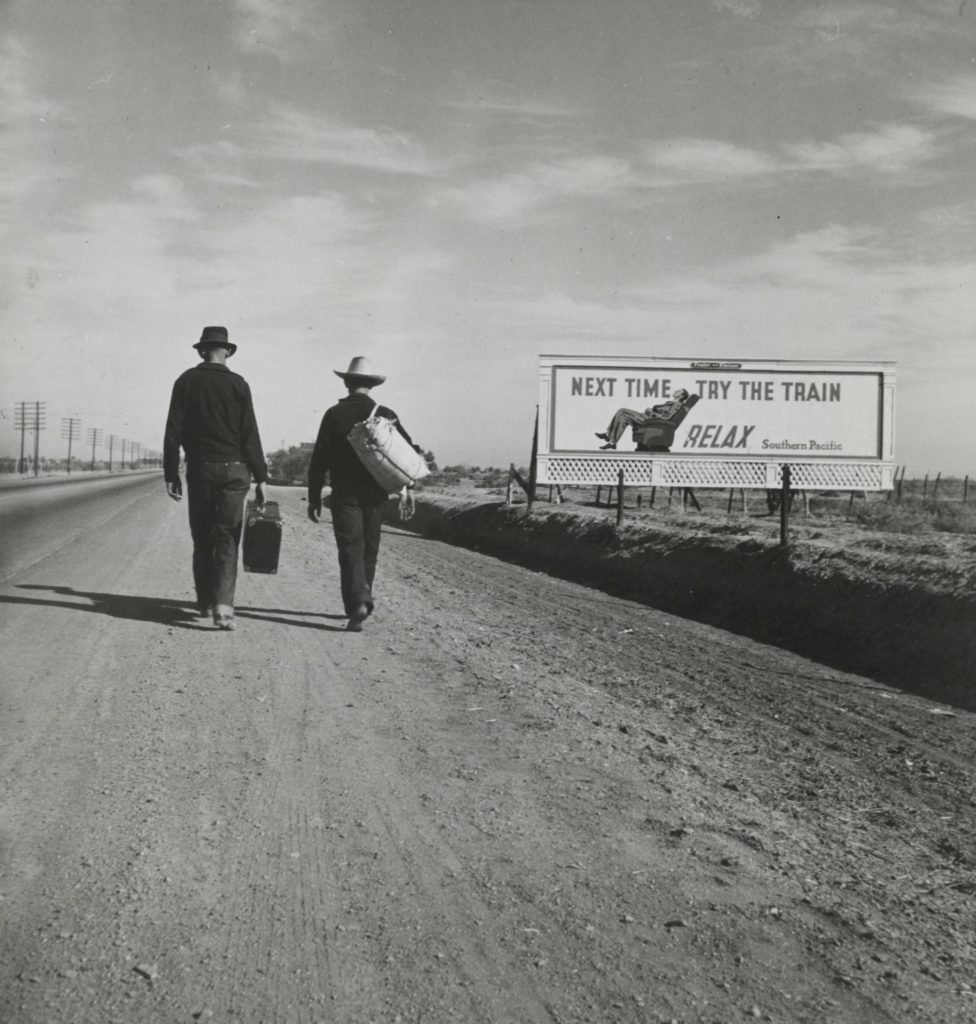 Dorothea Lange On the Road to Los Angeles, California March 1937

It’s a brilliant photograph, stark in its portrayal of these two men during the Depression years, on the road like so many in those years to some kind of better life, and the blithely indifferent image from a billboard of a man reclining in a comfortable seat on a Southern Pacific train. This is photography as art, as social art, as measuring the distances between what our advertising culture tells us, and the realities of the human lives around us.

It could be a modern day gospel story. It holds these two unnamed and unknown men in a dignified sympathy as we imagine where this road might take them, and the photograph framed on my desk holds as a kind of icon of the human experience of searching and hoping, and being known. It’s a gift of my visit to MoMA on this day, a gift of this great and compassionate photographer Dorothea Lange.

These days of sameness, of one day running into another, of asking again the question, what day is today, is it Tuesday or is it Wednesday? It seems that way all the time. Yesterday morning, feeling better after some after-effects of the second vaccine, I decided to take a road trip to Philadelphia, which is about 90 miles down the road from NYC. Out of the city, onto the NJ Turnpike, and 90 or so minutes later, I parked the car by the St. Francis Inn, walked to the nearby subway, and was on my way.

It was freeing, my first time out of the city since October, which was also a one-day road trip to Philadelphia. The weather was sunny and warm, and that helps. I got off the subway at 30th Street Station, got a Jersey Mike’s sub, and walked along the Schuylkill River up to the Philadelphia Museum of Art, which stands like a temple at the end of the Ben Franklin Parkway. I sat on a bench by the water and had my sub, the calmness of the water amid the busyness of the city.

The museum is only open a few days a week during this time of pandemic. I still have my membership. I always approach a visit to a museum with an open-ended “what will I see today?” On the second floor, in a darkly paneled room, a painting by Rembrandt of the head of Christ. He looks thoughtful, considering, human: a man living a life, a man who has seen life, who seems to know that life is a combination of all kinds of things, and perhaps an insight of what fate awaits him. This painting: it’s just there, and I am alone with it for a time, the life of the city just beyond the walls outside, and this quiet moment like a gift on this day.

On the other side of the main staircase, also on the second floor: an enormous archway, from a 12th century church in France. Its sense of harmony, scale, aligned to the human. The way the stone is cut, all the details. It was somehow transported to Philadelphia in the early 20th century and reconstructed here, and there is a drawing of the church of which it was once a part, falling into ruin, in the French countryside. Scale and harmony and beauty, and its effect on our sense of space and of being in the world.

And, from 1285, a small painting, once part of a diptych, of St. Francis of Assisi and a donor. The background is all in black, with a luminous Francis and the small figure of the donor, from more than 700 years ago. And here it is in Philadelphia.

Later, outside in the sunshine, after nearly two hours in the museum, it’s good to be outside in the fresh air and sunlight, walking in the city. It’s good to be in another city besides New York: Philadelphia is less intense, has more of a neighborhood feel, seems a little less crazy in some ways. I stop in a used bookstore on 2nd Street, and there is a cat in the store, resting on some books, keeping an eye out I am sure for mice or any other prowlers. I take the subway back to the Inn, say hello to the friars and staff there, and am back on the road and back in NYC by 8:00pm, an easy ride back. In this time of confinement, such a freeing trip, and I’m grateful for the time to do it.

P.S. – If you plan to make a gift to your local Franciscan Parish
through the Franciscan Challenge please send your donation to: